Most of us are familiar with Leonardo Da Vinci  as being a renowned artist who painted masterpieces such as the Mona Lisa and the Last Supper. However, Leonardo Da Vinci, who lived about 500 years ago, was much more than an artist. He was also a great thinker and fortunately for us, he noted many of his thoughts on sheets of paper. Even though they are over 500 years old, many thousands of these sheets of paper have survived in a good condition. Shown below is one such sheet.

The notes of Leonardo Da Vinci show that he had a very wide area of interest. For an example, the drawing below shows his idea for an helicopter, 500 years before modern helicopters were invented ! Quite a few of his ideas were for war machines. This one shows special canon balls that open up to let loose multiple smaller canon balls. Notice how, even though they are “engineering” drawings, they are still artistically beautiful as well. Leonardo was also very interested in the human body and did many anatomical studies on human and ox bodies.. However, as an anaesthetist, what I find very fascinating is Leonardo Da Vinci’s attempts to design a way for man to breath underwater. For an example, his note books contain these two drawings showing designs of an underwater breathing system. In this design, the submerged diver wears a mask that is connected to a long tube.. The long breathing tube is fixed to a disc which floats on the water. The floating disc keeps one end of the tube exposed to the atmosphere. The diver now simply breathes in and out through this tube. Of course, with our modern understanding of breathing systems, we know that this single tube breathing system would not work. Because of the long tube, the oxygen from the atmosphere wouldn’t reach the diver and nor would the carbon dioxide he produces reach the end of the tube to be expelled out. The diver would suffer what we know today as “re breathing”. He would soon die of hypoxia and hypercarbia. So it seems that Leonardo had designed his breathing system wrong. Or did he actually realise his mistake ? We will have to do some detective work to find out. Among the many thousand note pages, we find this one which shows another underwater breathing system. If you look closely, you will note that this underwater breathing system has two tubes, rather than the single tube that you saw previously. Below is the note page with the double tube breathing system. Perhaps in the text next to the diagram, he has mentioned such a mechanism?  Unfortunately the text only  mentions how the system is constructed and does not mention any mechanism to separate inspiration and expiration pathways. For an example, he mentions how to make the tubes rigid enough to prevent it collapsing due to water pressure, while still providing some flexibility. But there is no mention of inspiration and expiration happening in different tubes. We will therefore have to do some detective work to see if Leonardo had thought of a mechanism to separate the inspiratory and expiratory pathways in the breathing system. If you go through the other hundreds of pages of his notebooks, you will find the interesting page shown below. Don’t worry if you can’t see things too clearly. I will explain it all in a bit more detail soon. Let us look at the mask on page 647v a bit more closely. You can see that there is a small drawing near the mask (green arrow). The small diagram seems to show a detailed cross section of where the tubes are attached in the larger diagram next to it. And in this cross section, if you look closely, you can see one way valves ! (Do not worry if you are not convinced,  as I will show you better diagrams later). These one way valves will ensure that inspiration always occurs from one tube (green) and that expiration will always occur from the other tube (red). This is probably the oldest document that shows valves being used in a breathing system. Isn’t it amazing that this was done 500 years ago ! As mentioned before, do not worry if you are not yet convinced that the diagram shows valves. I will show you better material shortly. As mentioned before, some of you may doubt that the above diagram shows one way valves. Well, if you are such person, fortunately for you, Leonardo Da Vinci has drawn even more one way valve designs ! The arrow in the image below shows another set of valves drawn on the same page as the mask. I will show more details of it in the image that follows this one. Here is a close up of the one way valves shown above. The valves consist of two flaps, each of which open only in one direction.

During inspiration (green arrows), the green coloured flap will open and the red coloured flap will close. During expiration (red arrows), the green flap will close and the red one will open. For clarity, in the drawing, Leonardo has shown both valves open, whereas in reality, only one would be open at a given time. The two conical tubes ( like horns) would have been connected to the inspiratory and expiratory tubing going to the surface of the water. With these diagrams of one way valves, I hope you are convinced that Leonardo Da Vinci designed his breathing system to have separate inspiratory and expiratory tubing.

Page 647v has some more interesting objects drawn by Leonardo Da Vinci. I am not very sure what they represent and would welcome your thoughts on them. I think image A is another diving mask with the one way valves (B) located in the bulge at the top (image A, black arrow). Images C,D and E are also probably more one way valve systems connected to tubing. Please let me know, via the contact page, if you have any other ideas about these.

Leonardo was quite secretive about his underwater devices because he feared that they might be used for dangerous activities. For an example, divers at that time (and even in the present) could be used by the military to destroy ships. Perhaps for this reason, he has written extremely little on how the breathing system works. One has to, like we have done so far, use the images to guess how things work. However, with some more detective work, we can find some text where Leonardo mentions how the one way valves work. We again go to page 647v, which shows the diving mask. In this page, there is a small diagram (green arrow) that is interesting. I will show it in more detail later. I will show you how this little diagram will lead us to Leonardo’s textual description of his breathing system. In the enlarged image below, you see two openings (red arrows) with one way valves. One of the valves is quite clearly seen (green). Now if we further search the notes of Leonardo, we find this intriguing page. It has a diagram with similar valve flaps to those seen above. I will show further comparisons in the images that follow this one. Here is a close up of both diagrams to help you compare them.

Just in case you find the comparison difficult, I have tried to colour the images to help you. Fortunately, the text written by Leonardo that accompanies the drawing of the one way breathing valves explains how the valves work. I will translate it for you soon ! For those who can read Italian, here is a clearer version of the text.

I will shortly give the English translation of the above text. Please note that in Leonardo’s time, people did not know about oxygen or carbon dioxide. Instead, ventilation was considered necessary to “cool” the body. So when Leonardo refers to “cold air”, you can think of this as oxygen which “cools” the body. Similarly, when Leonardo talks about “hot air”, think of it as meaning carbon dioxide carrying heat away from the body. The English translation that I will show you is the best I have so far, based on feedback from Italian visitors to this website. If you can read Italian and can improve this translation, please let me know your suggestions. So finally, here is his text ! 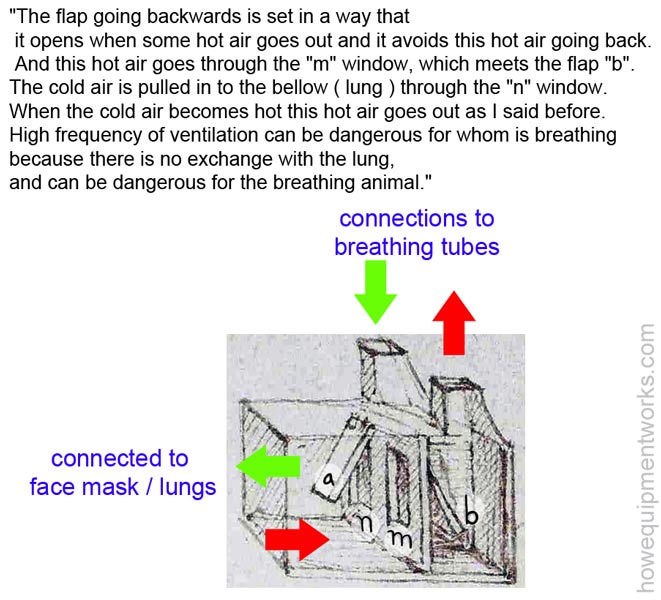 Now here is something very interesting about the  image we have have been discussing so far. As mentioned before, these diagrams are drawn on paper sheets. Let us wonder what is there on the other side of this paper. On the other side of the page is our familiar two tube diving apparatus ! I am not the first person to suggest the connection between Leonardo and the breathing system with one way valves, but collecting all the above information took me nearly two years, mainly because there is so little information about it on the web. That is why I thought I should share this fascinating material with all of you. Please ask your friends to visit this page. Also, I am not a professional historian, so I truly welcome any further information you can give me. Thank you and breath well.